The third quarter of 2017 was marked by Eurosic’s consolidation in Gecina’s accounts from August 29, 2017, with nearly €23.0M of gross revenues recorded from Eurosic. Restated for the healthcare portfolio’s sale (finalized on July 1, 2016), the Group’s gross revenues are up +1.1%. The first effects of this consolidation, the organic performance achieved and the impact of the buildings delivered in 2017 are already offsetting the loss of rent following the transfer of five buildings with strong value creation potential within the project pipeline and the sales completed in 2016.

Continued optimization of liabilities and increase in the float

Based on the good level of the Group’s key markets, the optimization of its liabilities and the accretive effects linked to Eurosic’s integration, Gecina is able to raise its targets for 2017 and is now forecasting at least +6% recurrent net income growth (+4.5% per share[2]) restated for the impact of the healthcare sale, representing a minimum of €340M (€5.20 per share).

[1] Over the first nine months of 2017, and 143,000 sq.m including transactions on the Eurosic portfolio exclusively since the end of August 2017

[2] The average number of shares retained for calculating this target factors in the change in the number of shares resulting in particular from the capital increase carried out in August, as well as the exchange offer for Eurosic, which closed on October 11, 2017. This growth rate also takes into account the adjustment factor (0.97391) linked to the capital increase excluding subscription rights. 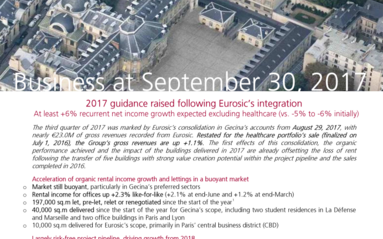