Historically active first half of the year: operational performances and amicable business combination with Eurosic

Pace of project deliveries and lettings accelerated in a buoyant market

Strengthening of the Group's strategic positioning on real estate markets

New organization rolled out on July 3 to support operational performance

* EBITDA less net financial expenses and recurrent tax, as defined in the accounts appended to this press release

** Table presenting the transition between Group shareholders' equity from the financial statements and EPRA triple net NAV available in section 3.7 of the half-year financial report

Earnings for the first half of 2017 reflect the solid trends for the rental and investment markets in Paris, with EPRA triple net NAV up +15% over six months and +2.1% like-for-like growth in office rental income.

Alongside this, the positive trends on the Paris markets have supported the major letting successes finalized since the beginning of 2017, with nearly 95,000 sq.m already let, pre-let or renegotiated, including the pre-lettings of Octant-Sextant (Levallois-Perret) and 20 Ville-l’Evêque (Paris CBD). These lettings have further strengthened Gecina's confidence in the outlook for growth over the coming years, particularly with its pipeline of projects that are under development.

These results also reflect a transition phase between the impact of the major volumes of sales and redevelopments carried out in 2016, which, as expected, explain the temporary contraction in recurrent net income for the first half of this year, and the future impacts that will be generated by Eurosic’s acquisition and the deliveries of buildings that are currently under development. These significant scope effects, with a full impact over the first six months of this year, will have a relatively limited impact on the second six months. As a result, Gecina is able to confirm with confidence its 2017 target for recurrent net income, excluding the impact of both the healthcare sale and Eurosic's acquisition, to contract by -5% to -6%.

The first half of the year was also marked primarily by the proposed amicable business combination with Eurosic, which Gecina will gain control of by end of August. This is a strategically structuring operation for the Group, enabling it to ramp up and accelerate the deployment of its strategy, in line with the ambitions announced at the start of the year. In addition to accelerating the portfolio rotation program, particularly through the sales programs for which processes are already underway, this operation will further strengthen the Group's exposure to the office real estate market's most central sectors, especially in Paris City. The combined structure will have a pipeline that is unrivalled in Europe, focused principally on the market's most buoyant sectors, offering increased visibility in terms of cash flow growth and value extraction. In the short term, this operation will have an accretive impact representing +10% per share on a fully year basis.

In connection with the financing for this operation, Gecina has already refinanced part of the €2.5 bn bridge, which made it possible to finance the operation, through a bond issue in three tranches for a total of €1.5 bn, with an average maturity of 10 years and an average coupon of 1.3%. A €1 bn capital increase with preferential subscription rights issue is also planned.

Alongside this operation, Gecina has remained active on the markets with a share buyback program that has now been closed, making it possible to buy back €224.5 M of securities at an average price of €121.8 per share. The Group has also finalized its acquisition of two office buildings in Paris' central business district and La Défense for a total of €141.5 M. In addition, Gecina has finalized sales of residential assets for €83 M, while a further €142 M of sales were subject to preliminary agreements at end-June 2017.

Since July 3, 2017, Gecina's teams have been working based on a new organizational framework. Two business units have been created for the office portfolio and the residential portfolio, with two executive directors recruited (Valérie Britay and Franck Lirzin respectively). This new organization will help build understanding of and improve the operational and financial performances of the portfolios concerned. Over the coming quarters, this new organization will also facilitate Eurosic's integration. The creation of a dedicated business unit for the residential division reflects Gecina's ambition to focus in priority on optimizing this portfolio's operational management and identifying opportunities for optimizing value.

Méka Brunel, Chief Executive Officer: “Over one year, the strategy rolled out by Gecina has made it possible to generate a total return of more than +22%, which reflects not only the Paris office market’s positive trends, but also the relevance of the Group’s positioning on the Paris Region's key sectors, as well as the potential for growth and value creation with the project pipeline. Through its proposed amicable business combination with Eurosic, Gecina achieved a historic first half of the year, establishing itself as Europe’s fourth-largest real estate group and the market leader for offices”.

[1] All other things being equal

[2] This target may be revised up or down depending on opportunities for investments and sales during the year. 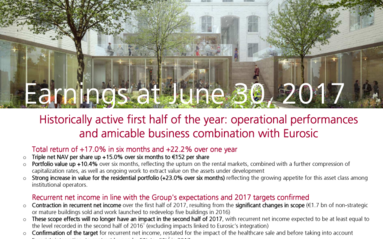