Gecina has today successfully placed a bond issue in three tranches for a total amount of 1.5 billion euros with an average coupon of 1.3% and an average maturity of 10 years:

With strong demand totaling around 5.5 billion euros, these three bond issues were nearly four times oversubscribed by a broad base of top-tier investors, confirming the market's confidence in the credit ratings of both Gecina and the combined unit created with Eurosic.

Carried out under particularly favorable market conditions, these issues are intended to refinance part of the 2.5 billion euro bridge financing set up for the business combination with Eurosic, with the remaining balance to be refinanced through a capital increase with preferential subscription rights for 1.0 billion euros. This business combination operation, announced on June 21, 2017, is in line with Gecina's total return strategy and will enable it to become Europe's fourth largest real estate group with a 19.3 billion euro portfolio.

These issues are effectively aligned with Gecina's overall financing strategy, enabling it to extend the average maturity of its debt, reduce its average cost and optimize its credit maturities, while combining short-term flexibility with long-term security. 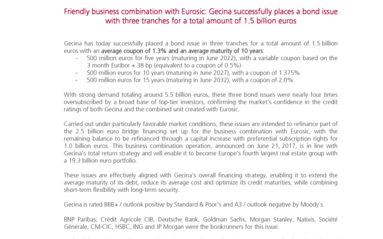