A Sciences Po Paris graduate, Joséphine Neuman Leriche, 33, brings nearly 10 years’ experience in the commercial real estate sector. She was notably with Unibail Rodamco from 2008 to 2014 as Leasing Manager in charge of an office portfolio, then Senior Leasing Manager for the shopping center division. To date, she was Deputy Leasing Director for La Vallée Village, part of the Value Retail group, which she joined in 2015.

Julien Landfried is joining Gecina as Chief of Staff and Public Affairs, reporting to Méka Brunel.

An HEC Paris graduate, Julien Landfried, 39, began his career in 2002 as Marketing Director with the CFPJ school of journalism. He later moved to Ineum Consulting (2004-2006), then worked for the French daily Marianne, heading up internet activities. From 2009 to 2012, he was Executive Director of Paris Tech Review, an online magazine linked to the Paris Tech engineering schools group. Since 2013, he was a Partner with Publicis Consultants’ Influence division. 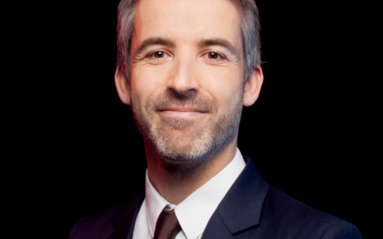 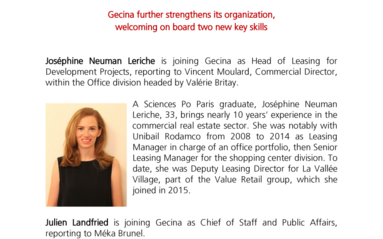