Two new leases for 55 Amsterdam, taking its occupancy rate up to 70%

Two new leases have been signed for 55 Amsterdam, with nearly 70% of this asset's space now let.

This building will be welcoming the teams from France's leading jewelry distribution company, the THOM Europe group, from December 2017 with around 3,200 sq.m of office space.

From September 2017, it will also be welcoming EDICOM, a world leader for B2B e-commerce, with nearly 500 sq.m.

Gecina was advised respectively by Catella and BNP on these two lettings with a firm nine-year lease for the THOM Europe group and a firm six-year lease for EDICOM.

Gecina is announcing that it has signed a firm nine-year lease with PartnerRe for nearly 5,700 sq.m of its building that is being redeveloped at 32 Rue Guersant in Paris' 17th arrondissement.

This lease has been signed almost one year before the completion of this full redevelopment, with the building scheduled for delivery in the third quarter of 2018.

On this operation, Gecina was supported by CBRE while PartnerRe was advised by JLL.

Extension for the Orange Group in SKY 56, increasing the pre-letting rate to nearly 90%

The Orange Group has also agreed to lease a further floor of the SKY 56 building in Lyon's Part-Dieu district over nearly 2,700 sq.m. This lease takes the project's pre-letting rate up to nearly 90%, almost one year before it is scheduled for delivery. 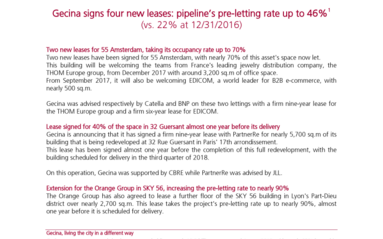