This bond issue was more than two times oversubscribed by a top-tier base of pan-European investors, confirming the market's confidence in Gecina's credit rating, in a positive market environment.

Alongside this, Gecina is opening a redemption offer, which will close on September 26, 2017, for three outstanding public bond issues:

HSBC and Société Générale are the bookrunners for this redemption offer.

In addition to financing for the operation to redeem these outstanding bonds, this issue will make it possible to refinance existing facilities, while extending the maturity and optimizing the cost of debt for the new combined structure with Eurosic. 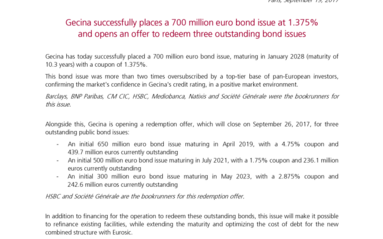