Takeover by Gecina, new governance for Eurosic and sale of a diversification portfolio by Eurosic Eurosic's newly realigned Board of Directors approved Eurosic's sale of its interests in certain diversification companies to the Batipart Group for a total sales price of 463 million euros. This sale, covering assets that were not in line with Gecina's strategy, was also carried out today.

Following Eurosic's takeover by Gecina, the following changes have been made to the composition of Eurosic's Board of Directors:

Under the terms of the agreement to acquire securities signed between Batipart and Gecina on June 20, Eurosic's Board of Directors[2], which was reminded of the findings from the report issued on July 26, 2017 by the independent expert, Cabinet Ledouble, notably confirming that the terms of Eurosic's sale of the diversification companies to the Batipart Group were fair and that there was no infringement concerning the equality of treatment for Eurosic's shareholders due to this sale, approved the sale of Eurosic's interests in Eurosic Lagune, SNC Nature Hébergements 1, Eurosic Investment Spain Socimi SA and Eurosic Management Spain SL for a total price of 463 million euros.

This sale was effectively carried out today following its approval by Eurosic’s Board of Directors3.

Mrs Méka Brunel, Chief Executive Officer and Director of Gecina and Chairman and Chief Executive Officer of Eurosic: “The amicable takeover with Eurosic is moving forward perfectly in line with the initial schedule set and has already led to the creation of the undisputed market leader for office real estate in Europe. The consolidated new combined structure will make it possible to continue building on and ramp up the success achieved by the two vehicles in the past few years, capitalizing on a portfolio of high-quality offices in the Paris Region's best business sectors. We are looking ahead to the future with great confidence, based on the solid fundamentals of this new combined group”.

Nicolas Ruggieri, Chairman of Batipart Immo Europe: “Batipart is proud to have contributed to the creation of an outstanding company that is now the benchmark for office real estate in France. For its part, the diversification assets will represent a basis for redeployment, with a pan-European investment horizon, focusing in particular on key areas for it such as Healthcare and Leisure”.

[1] At June 30, 2017, on a fully diluted basis taking into account the OSRA subordinated redeemable bonds and excluding treasury stock, representing a total of 64,732,147 shares 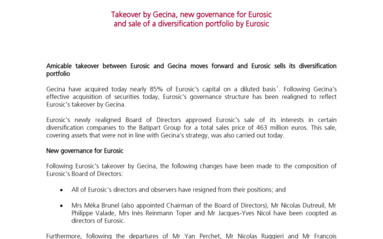