Gecina is further strengthening its Residential Division with the appointment of Thomas Degos, former Prefect and Director-General of Services for the Greater Paris Metropolitan Authority (Métropole du Grand Paris), as Executive Director Residential. This organization will ensure the continuity of the process and the momentum generated by the creation of a dedicated subsidiary. It will make it possible to embark on a new phase of development for the residential subsidiary by further enhancing the robust operational and financial performance levels achieved for over three years with the company’s residential portfolio. The creation of a dedicated subsidiary for the residential business, approved at the General Meeting in April 2020, will make it possible to develop Gecina’s residential portfolio in leading French cities by bringing investors on board. Thomas Degos will have a roadmap to continue rolling out the client-centric brands YouFirst Residence and YouFirst Campus, thanks in particular to digitalization and the deployment of new services.

Thomas Degos, 48, graduated from IEP d’Aix-en-Provence, EHESS and ENA (“Cyrano de Bergerac” class of 1999), and has over 20 years’ experience in senior public service positions. After starting out in his career with the prefect section in the Pyrénées-Orientales region and Guadeloupe, he held several high-level roles with the Ministry of the Interior’s General Secretariat.

In 2007, he joined the cabinet of Bernard Accoyer, National Assembly President, before serving with the ministerial offices of Jean-Louis Borloo, Minister of Ecology, as Deputy Chief of Staff (2008-2010), and Maurice Leroy, Minister for Urban Areas, in charge of the “Grand Paris” project as Chief of Staff (2010-2011).

After serving as the Prefect for Mayotte (2011-2013), Director-General for Overseas France (2013-2015), and the Prefect for Morbihan (2015-2016), he was appointed Director-General for Services for Métropole du Grand Paris in 2016. He left Grand Paris in 2018 to become Chief of Staff for Annick Girardin, Minister for Overseas France (April 2018-November 2019), before being appointed Interministerial Delegate for the Coronavirus Taskforce in March 2020.

Méka Brunel, Chief Executive Officer: “The creation of a dedicated subsidiary to house our residential business marked the culmination of three years of work, led by Franck Lirzin, to build the foundations for a residential platform that is aligned with the best standards for innovative operational technologies, client relations and environmental requirements. Thomas Degos’ arrival will further strengthen our ambition to capitalize on opportunities for growth and value creation on the residential market”. 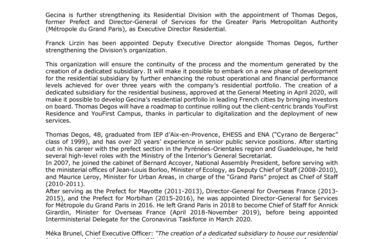