Appointment of an observer for Gecina’s Board of Directors

On January 20, 2020, Gecina’s Board of Directors appointed Mr Jérôme Brunel as an observer for a three-year term of office. Mr Jérôme Brunel’s expertise, particularly in terms of governance, CSR and public affairs, represents a significant asset, complementing the expert capabilities that are already in place within Gecina’s Board of Directors.

After joining Crédit Lyonnais at the end of 1990, Jérôme Brunel held several operational leadership positions in France, Asia and North America, before becoming its Head of Human Resources in 2001. When Crédit Agricole and Crédit Lyonnais merged in 2003, he was appointed Head of Human Resources for the Crédit Agricole Group. He was then Head of the Regional Banks Division, Head of Private Equity, Head of Private Banking and Head of Public Affairs for Crédit Agricole S.A. He served as the Group’s Corporate Secretary until he retired at December 31, 2019.

This appointment, which will be ratified at the Company’s next general meeting on April 23, 2020, is connected to a potential directorship for Mr Jérôme Brunel, and this proposal will be submitted for approval at this general meeting. 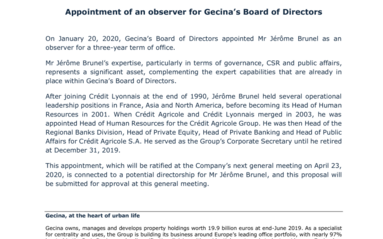