For the third consecutive year, Gecina is ranked first for the representation of women in management structures among SBF 120 companies

This ranking prepared by the observatory Ethics&Boards for the French Secretary of State for Gender Equality and Anti-discrimination was unveiled on December 6. Gecina’s position at the top of this ranking highlights the Group’s commitment to promoting gender parity within its management structures.

Méka Brunel, Chief Executive Officer: “I am very honored by this outstanding recognition. Gecina has a longstanding commitment to gender equality, which is part of the company’s genetic makeup. The results achieved, in terms of both parity at the highest level within the company and equal pay, reflect a committed approach engaging all members of staff. But above all, this is the result of a strong and shared conviction: gender diversity and parity are at the heart of the company’s performance and capacity for innovation”.

A strong focus for its corporate social responsibility, Gecina’s commitment to promoting parity is the result of a longstanding policy that has been in place since 2011. In line with this commitment, concrete measures have been rolled out to strengthen the number of women and their roles at every level throughout the company, notably with:

Moreover, the results achieved in terms of gender diversity and workplace equality were praised by the French President on March 8, 2018 as part of the International Women's Day event. 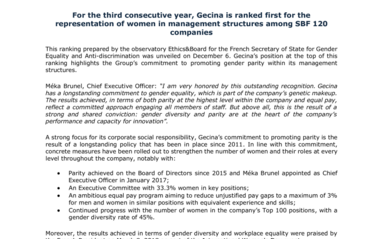