Gecina successfully carries out a new €500m bond issue with a 12-year maturity and 1.625% coupon

This operation is in line with the Group's financing strategy and will notably be used to repay some of Eurosic's financing facilities with shorter maturities and higher credit spreads. It will help extend the average maturity of debt and achieve the financial synergies announced for the business combination with Eurosic, while securing an attractive cost of financing over the long term.

In a more volatile market environment over the past few weeks, this bond issue was almost two times oversubscribed by a top-tier base of international investors, confirming the market's confidence in Gecina's credit rating. 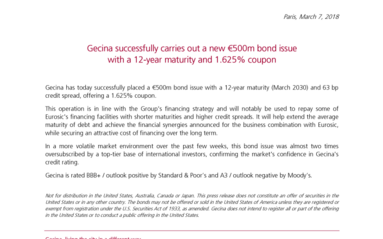