As part of International Women’s Day, the French President visited Gecina’s teams to pay tribute to the company’s exemplary performance championing gender equality in the workplace.

This official visit highlights Gecina’s longstanding commitments to gender equality and parity, which have established Gecina as the SBF 120’s leading company for the representation of women in management structures (Ethics & Boards rankings) since 2016.

These commitments are reflected in concrete actions at every level throughout the company:

Today, Gecina has also confirmed that it is joining the initiative led by the French President for a task force to be part of the World Economic Forum’s Closing the Gender Gap program.

This gender parity task force, made up of two public structures (Caisse des Dépôts et Consignations and BPI) and four leading private groups (Gecina, LVMH, Schneider Electric and Sodexo), will be chaired jointly by the French Finance Minister and the Prime Minister’s Secretary of State for Gender Equality. It will capitalize on its expertise and best practices to help draw up this program’s three-year action plan, covering its entire scope: increasing female representation in the labor force, advancing female progression into management and leadership positions, combating gender stereotypes, supporting women in business and narrowing the gender wage gap.

“Gecina’s commitment to gender equality in the workplace is the result of a longstanding policy put in place by Bernard Michel since 2011. The results already achieved are driving Gecina’s ambition to continue leading the way forward for equality. As Chief Executive Officer, this is one of the dimensions that my management is most attached to. Gecina’s inclusion in the task force is a great honor for both myself and all the company’s teams”, confirms Méka Brunel, Chief Executive Officer.

“Corporate social responsibility and gender parity were an integral part of my priorities when I joined Gecina. I am delighted with the results achieved following eight years of sustained commitments. The French President’s visit represents outstanding recognition for the work accomplished with our teams. By joining the World Economic Forum’s public-private task force, which will be chaired by Marlène Schiappa and Bruno Le Maire, I will be harnessing my experience to support this good cause, which I also believe is a major source of performance for businesses”, explains Bernard Michel, Chairman. 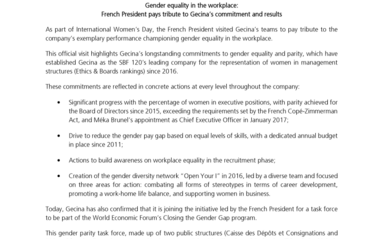