Gecina’s governance: Board of Directors’ proposals for the 2018 Annual General Meeting

Gecina’s Board of Directors decided, during its meeting on February 21, 2018 based on Governance, Appointments and Compensation Committee’s recommendation, to submit the following proposals at the Annual General Meeting to be held on April 18, 2018 which will approve the financial statements for the year ended December 31, 2017:

The appointment of Mr Bernard Carayon as a director for four years, replacing Mr Bernard Michel, whose term of office has ended.

During its work, the Board of Directors warmly thanked Mr Bernard Michel for everything he has contributed to Gecina’s results, positioning and reputation. Mr Bernard Michel, Chairman of the Board of Directors since February 2010 and also Chief Executive Officer from October 2011 to June 2013, has been a major contributor to Gecina’s transformation. The Board wished him every success with his future activities.

Bernard Michel: “Gecina is a leading company in Europe today. My mission has been accomplished following my terms as Chairman of the Board of Directors, marked by Gecina’s financial restructuring, the transformation of its shareholding structure and its development. Gecina has also become an exemplary company for Corporate Social Responsibility, Gender Equality and Innovation.

Following the General Meeting, I will be focusing on my role as Chairman of VIPARIS (exhibitions and entertainments) as the representative of the Paris and Paris Region Chamber of Commerce and Industry, and I will also be taking on new challenges, linked in particular to the digital revolution and practices for the real estate industry with the Real Estech association”. 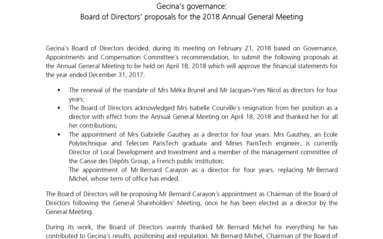