Gecina successfully places a 500-million euro bond issue with a 15-year maturity at 1.625% and launches a Tender Offer on three of its outstanding series of notes Alongside this, Gecina has launched a Tender Offer on three of its outstanding series of notes, with an average maturity of four years and an average coupon of 2.15%.

These operations will enable the Group to once again extend the average maturity of its debt, under favorable financial conditions, and to continue building an optimal credit schedule.

This bond issue was up to five times oversubscribed by a top-tier base of pan-European investors, confirming the market's confidence in Gecina's credit rating.

Gecina has launched a Tender Offer, which will close on June 3, 2019, on three of its outstanding series of notes:

BNP Paribas and Société Générale are the bookrunners for this Tender Offer.

This press release and the information contained herein do not constitute an offer to purchase nor a solicitation to sell the notes referred to above, nor an invitation to participate to the Tender Offer. 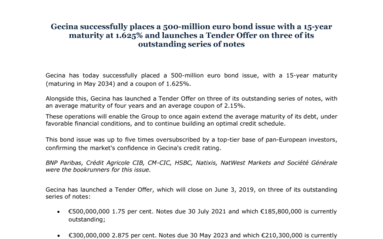