Gecina today carried out a new €500m Green Bond issue, with a maturity of 15 years and a 0.875% coupon. This operation is the first issue carried out since the Group transformed all of its outstanding issues into Green Bonds. It is therefore fully aligned with Gecina’s program aiming to accompany the continuous, global improvement in the Group’s asset portfolio, and particularly its environmental performance. It is based on an ambitious and dynamic Green Bond Framework (available on the Company's website). Alongside this, on July 1, following the settlement-delivery of the new issue, Gecina will exercise its make-whole call option for the early redemption of the €378m outstanding on the bond issue with a 2.00% coupon and a maturity of June 17, 2024 (ISIN FR0012790327), in accordance with the terms of the Base Prospectus from March 16, 2015. The redemption will be effective mid-July.

Gecina is continuing to optimize its financial structure with this operation, optimizing both the average cost and the maturity of its debt. Following this issue and the exercising of the early redemption option on the issue scheduled to mature in June 2024, the average maturity of Gecina’s debt will be increased by nearly one year. 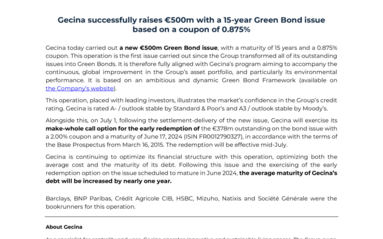