Gecina to recover €55m of damages following the criminal conviction of its former manager, Joaquín Rivero

After nearly 10 years of proceedings, Gecina has been awarded part of the damages caused to it by the unlawful actions of its former manager (2005-2010), Joaquín Rivero.

The Paris Appeals Court issued a ruling on December 5 acknowledging the expiry of the appeal that had been made by Mr Rivero, who passed away in 2016 and had been sentenced at first instance in 2015 to €209m for the damages caused.

In addition, the fate of the €86m representing the amount of dividends due to Joaquín Rivero through his company Alteco, subject to court-ordered liquidation proceedings in Spain, and which had been subject to a criminal seizure order issued by the judge Van Ruymbecke in 2012 and 2013 as part of these proceedings, has been finalized through a settlement agreement with its court-appointed liquidator, with this agreement also contributing to this favorable ruling.

Under this settlement agreement, Gecina will receive more than €55m of damages in time, representing approximately two thirds of the sums that had been seized during the investigation phase.

The decisive actions of Gecina’s works council, also a shareholder in the company, firstly, then of the association for the defense of minority shareholders (ADAM) and Mr Jeancourt-Galignani, Gecina’s former Chairman, who have provided their legal assistance to the company since 2008, notably concerning the seizure of the funds, made it possible to bring this first stage to a close. Gecina would like to praise the determination shown by these stakeholders, which, combined with its own actions, has made it possible to achieve this first result. 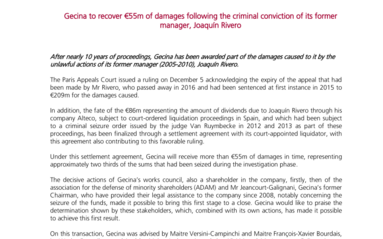