On July 12, 2018, in the second Grands Prix de la Mixité gender diversity awards, organized by the Institute for Responsible Capitalism (ICR) and the Ethics & Boards Observatory, Gecina won the award in the category for businesses with under 10,000 employees. The awards ceremony was held as part of the Paris Europlace International Financial Forum, further strengthening the focus on performance, governance and gender diversity in businesses.

Based on the Zimmermann index – an objective and independent measurement of gender diversity in businesses – these awards recognize the most advanced businesses in this area, covering three aspects: diversity in boards, diversity in executive management structures and the representation of women within the business.

Gecina is one of eight companies from the SBF 120 to be headed up by a woman and has one of the best gender diversity levels in the SBF 120's Top 100 firms. Within Gecina, women represent nearly 60% of all employees and the Board of Directors has 50% women, with five out of 10 members (at April 18, 2018).

With its strong commitments to gender equality in the workplace, Gecina has also had an equal pay program in place since 2011 aiming to reduce unjustified pay gaps to a maximum of 3% for men and women in similar positions with equivalent experience and skills.

Gecina's achievements in terms of gender diversity and workplace equality were praised by French President Emmanuel Macron on March 8, 2018 as part of the International Women's Day event. 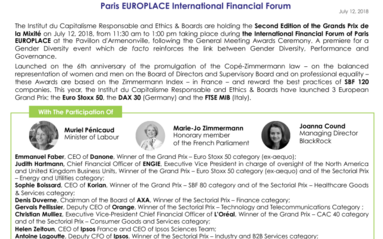