Once again this year, GRESB, MSCI, Sustainalytics and ISS ESG have recognized Gecina as one of the best performers in its sector for CSR, ESG and risk management. For the third consecutive year, Gecina achieved an overall score of 92/100 in the GRESB (Global Real Estate Sustainability Benchmark) rankings, with an improved score for environmental indicators. GRESB, which assesses companies’ CSR performance, made in-depth changes to its rating methodology this year. Specifically, it highlighted Gecina’s good CSR practices for redeveloping buildings, awarding a score of 95/100 for this scope, with 76,610 sq.m delivered in 2019. Gecina won first place in the dedicated group for listed office real estate companies in Western Europe.

Furthermore, since 2017, Gecina has maintained its triple A rating in the MSCI benchmark. Its rating is up 6% from 2019, thanks in particular to its higher “corporate governance” score and the strong certification rate for operational buildings (72% for Gecina, compared with a sector average of 25%).

The benchmark published by Sustainalytics, a world leader for ESG risk analysis, confirmed Gecina’s continued position as one of the world’s top 10 listed real estate companies out of the 415 companies assessed. According to its new methodology, Gecina’s CSR risk level is rated as negligible. More specifically, the rating for Gecina’s CSR action plans came in 4% higher than the last assessment.

Lastly, Gecina also confirmed its “B-” rating in the assessment by ISS ESG, positioning it as one of the best performers in its sector. 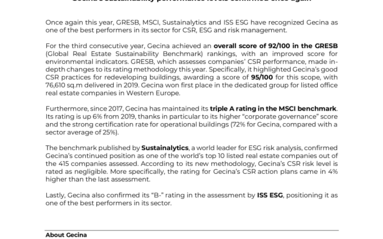