An Elabe study for Gecina

To collect the perspectives of key business leaders on the relationship to work and companies, future regional balances and the organization of living spaces, the environmental emergency and the impact of all of these changes on commercial real estate, Gecina conducted a qualitative survey with a number of leading executives. This study was carried out by the research and consulting firm ELABE from October 6, 2020 to January 20, 2021. In total, 24 interviews lasting one hour on average were conducted with executives (CEOs, Chairpersons and CEOs, General Counsels) from the following major industrial groups and service sector companies:

They represented 17 groups from the SBF 120, with eight listed on the CAC 40.

Key learnings from the survey

I - World of work and the health crisis: acceleration of trends and a revelation

Asked about the transformations already underway in the world of work, these 24 business leaders identified two fundamental societal phenomena that are transforming the way their companies operate.

This horizontalization movement has been accelerated by the impact of the digital transformation and the rapid development of new technologies, with careers evolving and the emergence of new ways of working, alongside growing porosity between work and home life.

While the survey revealed that the executives unanimously agree that trends have been accelerated by the health crisis, it also highlighted various fundamental concepts within businesses:

The executives believe that the crisis has also revealed the importance of human contact to promote collaborative work, support the company culture and ensure the company’s sustainability. The crisis has once again reaffirmed the physical workspace’s function: it is a place for meeting, with informal and spontaneous exchanges opening up ideas, for connections that feed the relationship with the company and engagement.

II- Office real estate: from a fixed commodity to a scalable experience-centric space

III – Tomorrow: companies, a new public space at the heart of the city?

Valérie Britay, Deputy CEO in charge of the Office Division: “This study highlights several underlying trends that have been identified by our clients and prospects at the highest level within their companies. The vision shared by these key business leaders regarding changes in the relationship to work and the future for offices confirms our idea that the future will be increasingly focused on a custom approach. With YouFirst, Gecina has given itself a brand, a range of services and a client-centric framework to guide its relations, to adapt its living spaces over time in line with the needs of businesses and their staff”.

All of the detailed findings from this survey and the executives’ testimonials are available here. 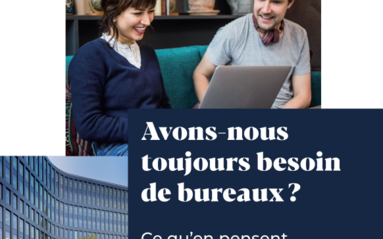 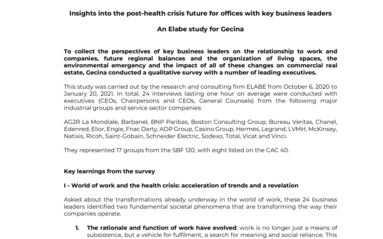 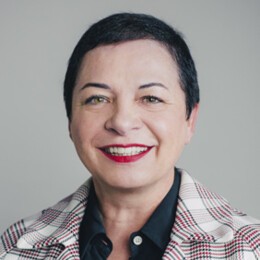