Moody’s has upgraded its outlook for Gecina’s rating from A3 (outlook negative) to A3 (outlook stable).

Moody’s indicated that the revision of Gecina’s rating outlook reflects the reduction in the Group’s debt, thanks to progress made with the program of sales announced when Eurosic was acquired, which has already made it possible to bring the proforma LTV, taking into account sales under preliminary agreements at end-June, down to less than 40% (38.4%).

The rating agency also highlighted the improvement in the Group’s liability structure, particularly with the financing lines transferred from Eurosic and Foncière de Paris to Gecina SA in June 2018, as well as the early repayment of financing facilities previously held by Eurosic.

Lastly, Moody’s approves the decision announced by Gecina at the start of the year to keep its residential portfolio at the heart of its strategy and the positive trends observed for office markets in Paris.

For Méka Brunel, Chief Executive Officer: “By upgrading the outlook for Gecina’s rating today, Moody’s has recognized the successful integration of Eurosic within a record timeframe, in line with the roadmap set out when the operation was announced, particularly in terms of reducing debt and restructuring liabilities, as well as integrating the teams and assets. The outstanding work accomplished by Gecina’s teams over the last 12 months has made it possible to achieve the Group’s objectives for its business combination with Eurosic so quickly”. 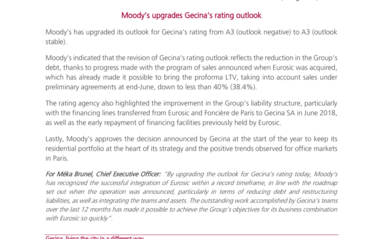