Julien Nataf will be joining Gecina on May 11, 2020 as Legal Director M&A and Real Estate. Sylvain Metz has been appointed Compliance Officer. As members of the Management Committee, hey will report to Frédéric Vern, Group General Counsel. Julien Nataf will be joining Gecina on May 11, 2020 as Legal Director M&A and Real Estate. As a member of the Management Committee, he will report to Frédéric Vern, Group General Counsel.

Julien Nataf graduated from Université Panthéon-Assas with a master’s in corporate law and tax. He also has a specialized master’s in law and international management from ESCP Europe, is a qualified lawyer (CAPA) and completed a program with the London School of Economics and Political Science.

He began his career in 2011 as a lawyer with the British firm Ashurst, before moving to Ivanhoé Cambridge Europe in 2014, where he spent nearly seven years as Legal Counsel then Senior Legal Advisor Europe. His experience and expertise, particularly on complex transactions in France and elsewhere in Europe, will be key assets for the Company.

Sylvain Metz has been appointed Compliance Officer. Reporting to Frédéric Vern, he will be a member of the Management Committee and will be the lead correspondent with the Board of Directors’ Compliance and Ethics Committee.

With a postgraduate DESS in law and new technologies, and a HEC Executive Education program, Sylvain Metz has over 20 years’ experience in legal director roles. He notably worked for the Saur Group and then Bureau Veritas as General Counsel-Compliance Officer Europe, before serving as Group General Counsel for the Apave Group until 2019.

The General Counsel’s Office, headed up by Frédéric Vern, is organized around three sections: 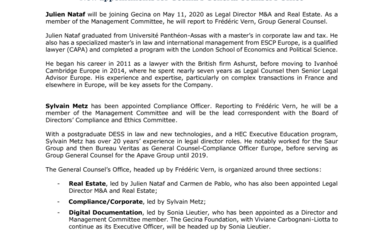