Increase in the occupancy rate

Significant rental reversion captured, particularly at the heart of Paris

In this context of good operational performance levels, and despite interest rates rising more quickly than expected, Gecina is able to confirm its recurrent net income per share target of €5.55 for 2022, up +4.3% from 2021. 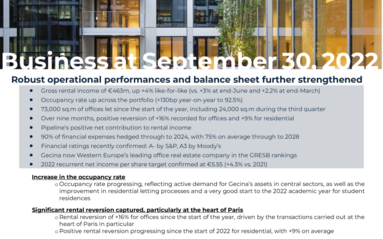