For the fifth consecutive year, Gecina is proud to lead this ranking drawn up by the consultancy Convictions RH and presented on October 25 by Ms Elisabeth Moreno, French Minister for Gender Equality, Diversity and Equal Opportunities. Gecina’s performance in this benchmark, which assesses the level of representation of women in management structures among France’s top 120 listed companies, illustrates its longstanding commitment to gender parity. This commitment is reflected in the strong, targeted measures rolled out for many years:

Méka Brunel, Gecina’s Director and Chief Executive Officer: “We have been ranked first for the last five years, which highlights Gecina’s very strong focus on gender equality. This longstanding commitment is an integral part of our company. Gender diversity and parity are fundamental elements for our company’s transformation and performance. It is both an honor and a great source of pride to receive this award on behalf of Gecina and all of its men and women”. 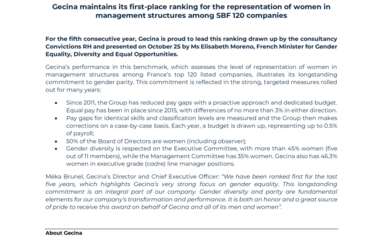