Gecina takes its LTV back down below 40% thanks to nearly €1.2bn of sales secured since January 2018

Gecina has signed preliminary sales agreements for two portfolios of buildings located in various French regions other than Paris for €775m. These buildings, from the former Eurosic scope, will be sold for a price in line with their June 2017 appraisals. These sales will be finalized before the end of 2018 once the standard conditions precedent have been cleared.

These two transactions and the other sales finalized recently take the volume of sales completed or under preliminary agreements since the start of the year up to nearly €1.2bn.

Thanks to the successful implementation of the sales program, the LTV level is back down to less than 40%. These transactions have also further strengthened Gecina's position in areas of scarcity and centrality at the heart of the Paris Region's urban hubs.

These agreements take the total volume of sales completed or secured since Eurosic's acquisition to nearly €1.6bn, in line with the target announced by Gecina in summer 2017 to roll out a sales program for €1.2bn to €2.2bn, following the business combination between the two entities.

Méka Brunel, Chief Executive Officer: “Gecina is continuing to move forward with the roadmap presented when it acquired Eurosic. Thanks to the reduction in debt following these sales, the Company has been able to successfully deliver on its commitments less than one year after acquiring Eurosic”. 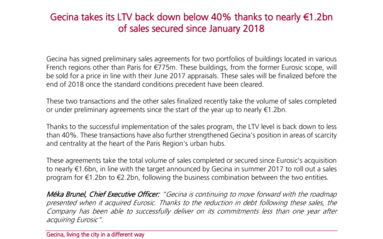