Gecina’s governance: Board of Directors’ proposals for the 2020 Annual General Meeting

Gecina’s Board of Directors decided, during its meeting on February 19, 2020 and as recommended by the Governance, Appointments and Compensation Committee, to submit the following proposals at the Annual General Meeting to be held on April 23, 2020 to approve the financial statements for the year ended December 31, 2019: If Mr Jérôme Brunel is appointed as a director by the General Shareholders’ Meeting, he will be classed as independent in line with the AFEP-MEDEF Code independence criteria. 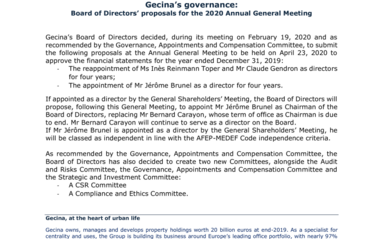