Jérôme Brunel appointed Chairman of Gecina’s Board of Directors

Gecina’s Combined General Meeting, chaired by Mr Bernard Carayon, was held as a closed session on April 23, 2020, taking into account the context of the Covid-19 epidemic, the measures adopted by the French Government to prevent this virus from spreading and the Board of Directors’ decision from March 31, 2020. All the other resolutions were adopted, including:

The terms of office of Mr Jérôme Brunel, Ms Inès Reinmann Toper and Mr Claude Gendron as Directors will run for four years through to the end of the General Meeting convened to approve the financial statements for 2023.

Mr Jérôme Brunel’s expertise, particularly in terms of governance, corporate social responsibility (CSR) and public affairs, represents a significant asset, complementing the expert capabilities that are already in place within Gecina’s Board of Directors. Jérôme Brunel is an Institut d’Études Politiques de Paris graduate, has a master’s in public law from Université de Paris-Assas, and attended both ENA (1980) and INSEAD (AMP - 1990). After joining Crédit Lyonnais at the end of 1990, Jérôme Brunel held several operational leadership positions in France, Asia and North America, before becoming its Head of Human Resources in 2001. When Crédit Agricole and Crédit Lyonnais merged in 2003, he was appointed Head of Human Resources for the Crédit Agricole Group. He was then Head of the Regional Banks Division, Head of Private Equity, Head of Private Banking and Head of Public Affairs for Crédit Agricole S.A. He served as the Group’s Corporate Secretary until he retired at December 31, 2019.

These two areas were previously covered by either the Audit and Risks Committee or the Strategic and Investment Committee. In February 2020, the Board of Directors considered that these two essential areas needed to be addressed with a more detailed approach by specialized Committees.

The creation of the CSR Committee illustrates Gecina’s strong commitment to position CSR stakes at the heart of its value creation model and strategy, and the strong expertise of the Directors appointed to it represent a clear asset for Gecina to position these stakes at the highest level. This Committee will be responsible for providing the Board of Directors with recommendations on the Group’s CSR commitments and policies, their consistency with the expectations of its various stakeholders and the monitoring of their deployment.

The creation of the Compliance and Ethics Committee will enable Gecina to align itself with market best practices and the distribution of standards relating to anti-corruption. Its members’ expertise will make it possible to cover these fields in line with leading industry standards. This Committee will be responsible for providing the Board of Directors with recommendations on all matters within Gecina relating to anti-corruption compliance and ethics, as well as personal data protection.

Composition of the Board of Directors

The Board of Directors has 11 members, with 45% women and 64% independent Directors:

Composition of the Committees

The Board of Directors decided to review the constitution of the other Committees,  taking into account the creation of the two new Committees as mentioned above. The composition of each Committee will be as follows:

As a solidarity measure in response to the serious health crisis faced today, Ms Méka Brunel, Gecina’s Chief Executive Officer and Director, decided to propose to reduce her fixed compensation for her position as Chief Executive Officer by two months for 2020, representing around 17% for this year. This proposal was approved by the Governance, Appointments and Compensation Committee on April 21, then by the Board of Directors, which praised this initiative (following its previous praise for the initiative by Gecina’s Directors, who proposed that the Board of Directors should decide not to pay any remuneration for the Board meetings linked specifically to Covid-19). Gecina has decided to donate an amount equivalent to these two months of salary and the corresponding payroll tax savings to the Gecina Foundation to support charities working to combat Covid-19.

To align itself with the French Government’s recommendations concerning the moderation of dividends paid, Gecina’s Board of Directors decided on March 31, 2020 to submit a proposal at the General Meeting to limit its dividend for 2019 to €5.30 per share (versus €5.60), with this amount covering the Company’s legal obligations under the SIIC tax system.

The voting results will be available shortly on the Group website. 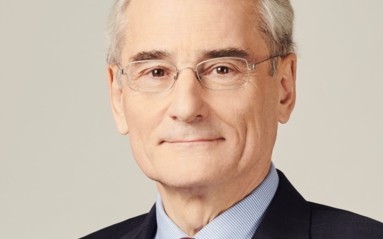 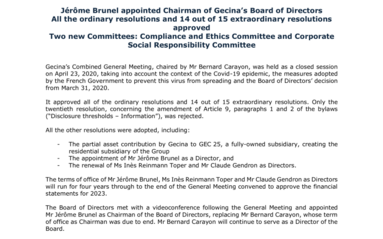